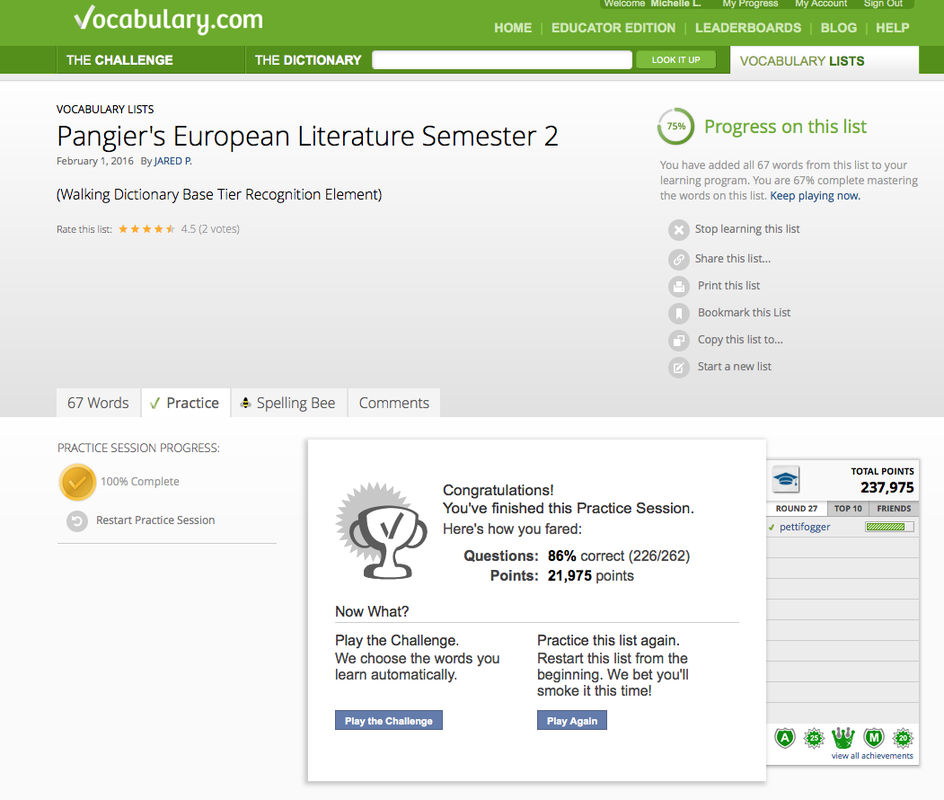 1. Annihilation
destruction by obliterating something
Ex: “We do not fight, we defend ourselves against annihilation” (Remarque 113).
OWN: John and Bill were shocked when they learned that their tree-house was annihilated.
Used In Writing: There will be no such annihilation of certain memories that I might want to crush.

2. Artillery
large but transportable armament
Ex: “Battle planes don’t trouble us, but the observation planes we hate like the plague; they put the artillery to us” (Remarque 128)
OWN: The soldiers had artillery.
Used In Writing: I soon realize I have no idea how to explain froth, artillery, convalesce.

3. Belabour
attack verbally with harsh criticism
Ex: “We sit as though in a boiler that is being belaboured from without all sides” (Remarque 111).
OWN: My sister belaboured me when I failed at snowboarding.
Used In Writing:  There were LOTS of bickering, indignation and belabor at times, but who doesn't have that during their high school life?

4. Banal
repeated too often; overfamiliar through overuse
Ex: “If one wants to appraise it, it is at once heroic and banal - but who wants to do that?” (Remarque 272).
OWN: The song "Happy" by Pharell Williams is always playing on the radio, and is now banal.
Used In Writing: Those tests that you crammed for, the banal information that teachers teach over and over.

5. Convalescent
returning to health after illness or debility
Ex: “Perhaps you will go to the convalescent home at Klosterberg, among the villas Franz” (Remarque 30).
OWN: Marc will undergo a convalescent treatment so that he can heal before the big tournament.
Used In Writing:  I've convalesced and now I'm better. Amazing, right?

6. Convulse
move or stir about violently
Ex: “...feel how the body suddenly convulses, then becomes limp” (Remarque 216).
OWN: Thomas convulses when she tries to hug him.
Used In Writing: And when I had some bad grades show up on power school, convulsion is something that I truly felt like doing.

7. Froth
a mass of small bubbles formed in or on a liquid
Ex: “All my efforts subside like froth into the one desire to be able just to stay lying there” (Remarque 211).
OWN: After a few minutes of cooking, the soup I was making had froth formed at the top.
Used In Writing: I soon realize I have no idea how to explain froth, artillery, convalesce.

8. Furtive
secret and sly or sordid
Ex: “They have dysentery; furtively many of them display the blood-stained tails of their shirts” (Remarque 190).
OWN: Josie's new stray cat she had picked off the street was furtive, she can't let her mother see.
Used In Writing: And although I may look like I am furtive at nature, deep down I am just a person who likes to be loud and have fun.

9. Gangrene
the localized death of living cells
Ex: “This atmosphere of carbolic and gangrene clogs the lungs, it is a thick gruel, it suffocates” (Remarque 29).
OWN: The doctor says that my leg has grown gangrene, and that it would have to be amputated.
Used In Writing: Yes, I now understand what a gangrene is.

10. Indignation
a feeling of righteous anger
Ex: “Three quarters of his vocabulary is derived from these regions, and they give an intimate flavour to expressions of his greatest joy as well as of his deepest indignation” (Remarque 8).
OWN: Bart was feeling strong indignation when he found out that his girlfriend was cheating on him.
Used In Writing:  There were LOTS of bickering, indignation and belabor at times, but who doesn't have that during their high school life?

11. Peevish
easily irritated or annoyed
Ex: “Everyone is peevish and touchy, we do not take kindly to all this polishing, much less to the full-dress parades” (Remarque 202).
OWN: Marianne grew peevish because her friend was walking too slow.
Used In Writing:  You've had your good share of peevish times, but it means nothing now.

12. Quixotic
not sensible about practical matters
Ex: “If it were possible for us to save them, then it would be seen how much we cared - we would have a shot at it through we went under ourselves; for we can be dammed quixotic when we like; fear we do not know much about - terror of death, yes; but that is a different matter, that is physical” (Remarque 139)
OWN: Eric's quixotic nature showed when he chose not to drive to the next city, but to walk instead.
Used In Writing: It's quixotic to think that you can graduate high school without studying or trying.

13. Queue
a line of people or vehicles waiting for something
Ex: “At the head of the queue of course were the hungriest” (Remarque 3).
OWN: The music concert had a queue of people waiting to get inside.
Used In Writing: We are all in a queue, waiting for our chance at living a fulfilling and happy life.

14. Remnant
a small part remaining after the main part no longer exists
Ex: “And at each call a little group separates itself off, a small handful of dirty, pallid soldiers, a dreadfully small handful, and a dreadfully small remnant” (Remarque 135).
OWN: The fire burned the main part of the house, but remnants of furniture remained.
Used In Writing: All the remnants of my memories of high school will hopefully stay with me for years to come..

15. Reverberate
ring or echo with sound
Ex: “The roar of the guns make our lorry stagger, the reverberation rolls ragin' away to the rear, everything quakes” (Remarque 53).
OWN: The librarian grew angry when Susan's phone reverberated loudly.
Used In Writing:  Reverberate these words over and over: "YOU GOT THIS." in the back of your mind.